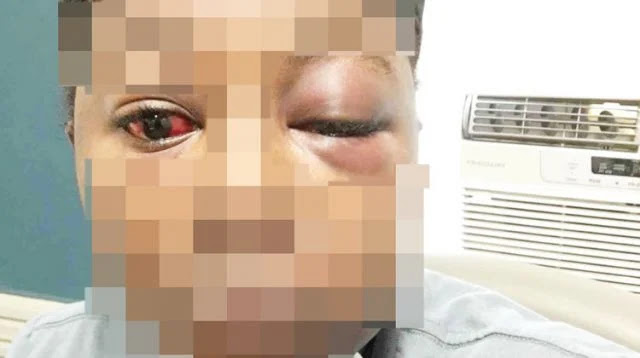 A kidnapping victim has taken to social media to describe how she was allegedly kidnapped and sexually abused by gunmen while traveling to Rivers State. The woman, who goes by the Twitter handle @Blessedcindy0, claimed that she and five other people were kidnapped on June 23, 2021. She captioned the thread with a photo of her battered face and stated that she had been admitted to a hospital following the ordeal.

According to her, she boarded a vehicle in an Enugu park without any forewarning of impending doom. She said the last thing she remembered was feeling “something cold on my nose and dozing off” while texting her sister. “I awoke to find the six of us tied to a chair in a bungalow. I knew right away that I had been kidnapped. There was this guy sitting down with a gun staring at us without saying anything until a huge man came out of the bungalow and told us to pray. He first slapped us, then told us that we had been kidnapped and that we should not be afraid because as long as our relatives cooperated with them, nothing bad would happen to us,” she added. According to the social media user, her sister sold some property and borrowed money to pay the N2m ransom demanded by the kidnappers.

According to her, the gunmen warned her sister not to notify any security agency because neither the police nor the military could intervene. She claimed to have witnessed the deaths of two of the six victims because their families were unable to meet the demands, adding that three other victims were released after paying N2m each. “One of us was named Philip,” she explained. When he asked who he should call to demand ransom, Philip replied that he doesn’t have anyone to call and that he is just a regular businessman trying to make ends meet. “When they called my sister, they told her not to tell the police or army and that there was nothing they could do (that was when I knew my own was done); they told my sister that she would have to pay N3,000,000 or she would never see me again.

My father is not particularly strong, so my sister had to keep everything away from him. Two people were killed in front of me (Philip and another girl) because they couldn’t meet their demands, and the other three were released after paying N2,000,000 in ransom. “They didn’t kill me because my sister was answering calls and cooperating with them even after a week. My sister had to sell some of her possessions and take out a loan to pay the N2,000,000. Even so, starting on June 26, 2021, they beat me every night and raped me twice.” The survivor stated that she was dropped off late at night at Four Corners Junction near Agbani in Enugu State’s Nkanu West Local Government Area. She stated that she was admitted to a hospital and that the experience, as well as the execution of two of the victims, had traumatized her. “I can’t take Philip or that girl they murdered off my head. They killed and dismembered them. I can still recognize the location where they kept us. When they wanted to drop me off after my sister had paid, they were stopped by the police, who did not bother to look inside the car. They simply let them pass. Oh, my goodness! They also took the entire balance of my account, which was approximately N268,000. Nigeria has let me down. “I sleep and wake up with this traumatic experience, and I want to commit suicide,” she added. PUNCH Metro’s attempts to speak with the victim and ascertain her condition were futile because she did not respond to a message from our correspondent. Daniel Ndukwe, the Enugu State Police Public Relations Officer, said he could only comment on the case after learning more about the kidnapping.

“Where in Enugu did the incident occur?” he asked. Let us know the person’s name, where it happened, and the date and time. It will be beneficial. Please send this information to me as soon as you receive it.