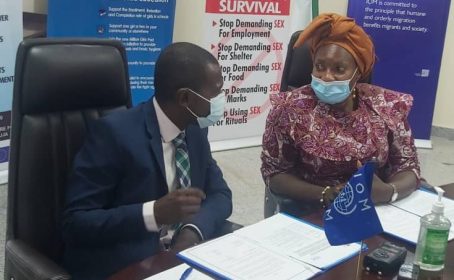 To test the instruments, NAPTIP personnel would be trained in the use of them in Edo, Lagos, and Delta states following the introduction.

IOM and the Federal Government of Nigeria have launched a tool to improve the identification, screening, and reporting of victims of human trafficking in Nigeria, according to the organizations. “The tool was launched as part of the 2021 World Day against Trafficking in Persons,” said Stylia Kampani, IOM Nigeria’s head of communication, in an Abuja statement issued on Wednesday.” The IOM and the National Agency for the Prohibition of Trafficking in Persons collaborated on the inauguration, according to the release (NAPTIP). It will allow for a uniform approach to the identification, referral, and protection of victims of trafficking, according to the IOM (VoTs). World Day against Trafficking in Persons (WDATIP) is being commemorated on the same day as the inauguration. To increase public awareness of the situation of victims of human trafficking and to promote and safeguard their rights, the day was created.

As a result of their deteriorating economic circumstances, vulnerable individuals were recruited for labor or sexual exploitation. This is a first step in giving victims a voice, since it allows them to express their experiences, promote referral channels, and give comprehensive protections services, according to the report’s findings. As Franz Celestin, the IOM’s Chief of Mission, explained, the program would strengthen the identification process and ensure that more VoTs were sent to the correct services.

The profile exercise, he said, will help to better understand human trafficking in Nigeria, as well as guide the creation of national policies and future programs. According to the statement, data obtained from screening efforts would be disaggregated by gender, age, types of exploitation, and other relevant variables. In accordance with IOM guidelines, the goal is to provide first-line officials with harmonised tools to effectively identify and refer victims of human trafficking. They were reviewed by relevant stakeholders to ensure that they were comprehensive as well as enduring. The process for developing these tools began in November of 2020. NAPTIP staff will be taught on how to use the tools after the launch. “Screening and reporting tools will also be deployed along the Nigerian border at entry and exit points,” the report said. According to Sen. Basheer Mohammed, Director-General of NAPTIP, victims of human trafficking need to be safeguarded so that they can enjoy a life of integrity, free from dehumanisation and degrading treatment of any sort.

Since 2017, the IOM has offered assistance to 21,771 returnees, of which 2,302 were trafficking victims. A second purpose of the instrument, according to IOM, is to ensure that the date acquired is integrated into an information management system in the long run (IMS). (NAN)